For Providers
For Patients

For Patients
For Providers 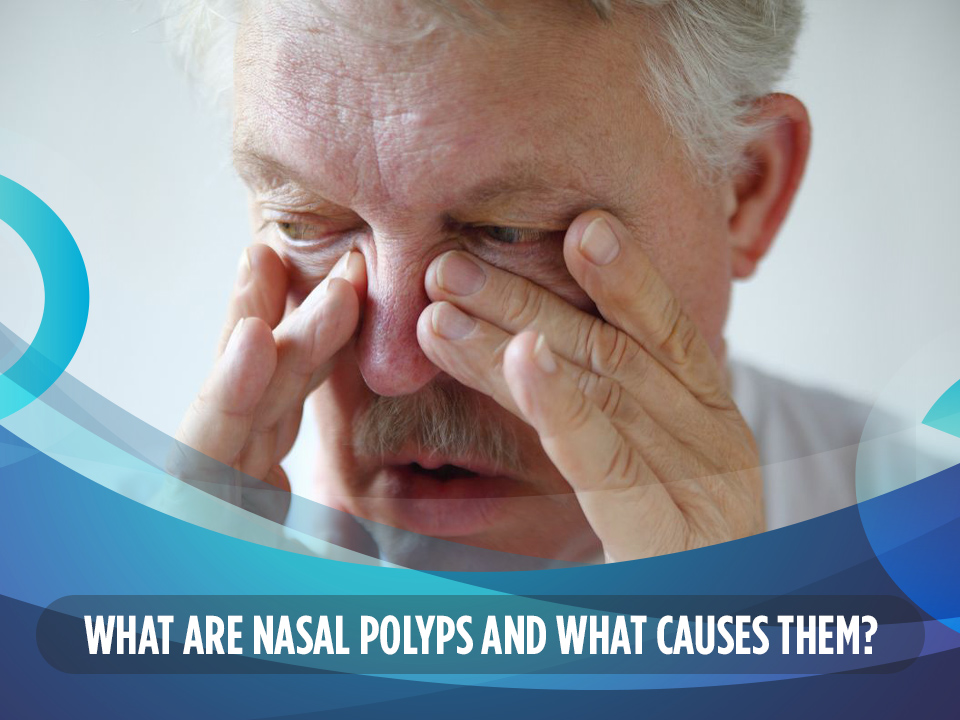 What Are Nasal Polyps and What Causes Them?

Have you ever felt like you have a cold that doesn’t go away? Nasal congestion that doesn’t seem to stop, even with over-the-counter cold or allergy medication, may be due to nasal polyps.

Nasal polyps are soft, painless, noncancerous growths on your nasal passages or sinus lining. They hang down like teardrops or grapes. They result from chronic inflammation and are associated with asthma, recurring infection, allergies, drug sensitivity, or certain immune disorders.

Small nasal polyps may not cause symptoms. Larger growths or groups of nasal polyps can block your nasal passages or lead to breathing problems, a lost sense of smell, and frequent infections.

Nasal polyps can affect anyone, but they’re more common in adults. Medications can often shrink or eliminate nasal polyps, but surgery is sometimes needed to remove them. Even after successful treatment, nasal polyps often return.

How Do You Know If You Have Nasal Polyps?

Nasal polyps are non-painful, soft growths that develop within the nasal passages. They’re most common when your upper sinuses flow into the nose (where your eyes, nose, as well as cheekbones (meet). Because polyps lack nerve sensitivity, you may not be aware that you have them.

Polyps can enlarge to the point that they clog your nasal passages, causing chronic congestion. Among the signs and symptoms are:

What Are Nasal Polyps, And How Can You Get Rid Of Them?

Nasal polyps are harmless growths that are not malignant. They live in the nasal passages and sinuses, hollow spaces within bones surrounding your nose. Mucous membranes – thin, squishy tissue that lines various body components — give them their shape.

In some cases, nasal polyps can become inflamed and large, obstructing nasal passages and sinuses.

Who Is At Risk For Nasal Polyps?

Nasal polyps usually appear in persons in their 30s or 40s when they are well into adulthood. They’re frequently associated with a nose inflammatory condition, such as:

Read More: Topical Anesthetic Solutions For Laryngoscopy You Should Know

Is It More Common For Nasal Polyps To Appear Solely On A Single Side Or Even Both Edges Of The Nose?

Nasal polyps commonly occur on both sides of the nose. A single-sided growth could be something else entirely, such as a malignant tumor.

What Are The Causes?

Polyps form when the mucous membranes that line the nose and sinuses alter. The membranes become irritated over an extended period of time or repeatedly. Swelling, redness, as well as fluid buildup are all symptoms of inflammation.

According to researchers, inflammation is thought to be caused by allergies and infections. They believe this because they examined tissue from nasal polyps. Extra eosinophils, white cells connected to infections, as well as allergic responses were found in those samples. The evidence indicates too few fluid-filled growths that cause inflammation. Polyps form from these fluid-filled growths.

How Do You Know If You Have Nasal Polyps?

Small polyps may be undetected for a long time. However, when they develop, they can lead to:

When polyps grow large enough, they can obstruct the nasal passages as well as the sinuses, resulting in the following symptoms:

What Are The Signs And Symptoms Of Nasal Polyps?

Consult a doctor if you’re experiencing symptoms of nasal polyps. A healthcare clinician may use the following methods to diagnose nasal polyps:

What Are The Options For Treating Nasal Obstructions?

Although nasal polyps cannot be healed in all people, there are numerous therapies that can help:

If you have an illness, your doctor may also prescribe antibiotics.

Surgery can remove the polyps if your symptoms aren’t improving. The type of surgery depends on the size of the polyp. A polypectomy is an outpatient surgery done with a small suction device or a microdebrider that cuts and removes soft tissue, including the mucosa.

For larger polyps, your doctor can perform an endoscopic sinus surgery using a thin, flexible endoscope with a tiny camera and small tools on end. Your doctor will guide the endoscope into your nostrils, find the polyps or other obstructions, and remove them. Your doctor may also enlarge the openings to your sinus cavities. This type of surgery is an outpatient procedure most of the time.

What Are The Potential Complications Of Nasal Polyps?

Treating nasal polyps, especially with surgery, may result in nosebleeds. Surgery may also result in infection. Continued treatment with nasal steroid sprays or oral corticosteroids may lower your resistance to sinus infections.

What Can I Do To Avoid Nasal Polyps?

Nasal polyps are not preventable for everyone. However, you may do a few things to aid yourself. The following are some of the strategies:

Is It Possible For Polyps To Reappear Following Treatment?

Polyps frequently reappear following therapy. Many patients will need to be on steroid medications for an extended period of time or will need to have surgery again.

Read More: Is Hormone Replacement Therapy Beneficial For You?

What Are Some Questions I Should Ask My Doctor Concerning Nasal Polyps?

Consider the following questions for your healthcare provider:

When Nasal Polyps grow in the nose or sinuses, they can cause bothersome symptoms and lead to infections. If you’re experiencing new or worsening symptoms, talk to your healthcare provider about medications and short surgeries. These treatments can shrink it and relieve symptoms.

Do you need more information or guidance on how you can benefit from our compounded medicines in cases of it?
King’s Pharmacy and Compounding Center has a combined 30+ years of pharmaceutical experience. We are NABP® Accredited and specialize in customized pharmaceutical compounding for humans and animals. To learn more, visit us!

King's Pharmacy and Compounding Center has a combined 30+ years of pharmaceutical experience. We are NABP® Accredited and we specialize in customized pharmaceutical compounding for humans and animals.

Subscribe to our Newsletter For Special Deals and Offers